Below are a series of maps showing the foundation of new Jewish congregations in Massachusetts, from the mid 1800s through the 2000s.

Boston was a key element of the Jewish settlement and migration within Massachusetts, in terms of quantity of Jews as well as a gateway to other areas of the state.

The data used was based on work by Carol Clingan & the Jewish Genealogical Society of Greater Boston. Some congregations merge, move, and rename themselves which is not captured in how the data below is presented. These congregations are treated as a brand new congregation instead a continuing older one. Certain synagogues were located on streets that no longer exist. We have done our best to use older maps to determine the geo-coordinates for these synagogues. Some points will have * values, this is Tableau’s method of representing multiple points sharing a location (congregations in the same building).

All maps, visualizations, and text are by Jasper Trouerbach. The maps are best viewed on a desktop computer. 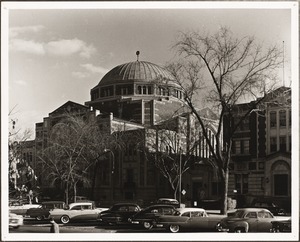 The Jewish settlement of Massachusetts began in the mid 1800s. The peak of congregation founding was during the turn of the 20th century, coinciding with the immigration boom of Jewry from Eastern European countries.

Here we see the history of congregation founding in Massachusetts outside of the Boston area. Immediately it is apparent that this process started two decades later than it did in Boston, and that the peak of new congregations is not nearly as high without Boston. During this 1880s – 1910s immigration peak, Boston had almost as many new congregations as the rest of the state combined.

So if Boston is so important to this Jewish story, where in the city did Jews live? Jews actually lived all over the city at various points. There are certain periods where there are Jewish neighborhoods (North/West Ends in the 1890s, Dorchester/Roxbury in the early 1900s) but much of the city has some history of Jewish occupancy. Boston’s Jews would migrate within and around the city as areas became suburban and then urban.

This heat map provides some key information. Jews began to settle in a small core in the city, before branching further out. The first Jews created the groundwork upon which later Jewish communities would come in and build off of before moving away from this centralized area.

The first synagogue was Congregation Ohabei Shalom. This group along with a few other German Jewish immigrants created the first Jewish community in Massachusetts. Boston was late among Northeastern US cities for developing a Jewish community. By 1850 there were thriving Jewish communities in cities like New York, Philidelphia, and Chicago. Some of these Bostonian congregations have defined Boston’s Jewry throughout the years and still exist in some way today (Mishkan Tefilla, Ohabei Shalom, Temple Israel).

The late 19th century and early 20th century was a boom period for Jewish immigration to Boston with 142 new congregations over a 40 year period. Jews from Eastern Europe seeking economic opportunities and political standing looked towards Boston. More than half of newly founded congregations at this time would be in the North End and the West End, traditional immigrant neighborhoods. Because of the influx of people these areas quickly became overcrowded and some individuals moving in would just as quickly try to move out.

It is possible that the number of congregations in these areas was even higher, as it is difficult to determine informal congregations that may have been held between a few families or within tenement buildings and storefronts.

This immigrant boom would continue until the inter-war period, when national restrictions such as the Johnson-Reed Act of 1924 prevented and restricted immigration from much of the world.

Still in the time leading up to this there were record high levels of immigration.  With more families moving into these immigrant neighborhoods, Jews that had immigrated earlier tried to move out of overcrowded conditions. Recently immigrated Jews would move to areas where wealthy Jews lived, who in turn moved to get away from their socio-economically mobile Jewish brethren. This increased the size of communities in East Boston, Chelsea, and the Blue Hill Ave area of Roxbury/Dorchester. These areas would become centers of Boston’s Jewish life at the time.

From the end of World War II and with the rise of suburbia, Boston’s Jewry and Boston’s overall population faced the issue of “urban exodus”. Starting in the 1930s Jews began to leave the city. By the time red lining practices were implemented in the late 1960s, they provided the death blow to an already declining inner city Jewish population. Dorchester and Roxbury previously had been fairly well integrated areas where Jews and African Americans interacted regularly, but these policies drove Jews to abandon their historic communities. They would leave for cities outside of Boston and create new Jewish concentrated areas in cities such as Brookline, Newton, and Sharon.

From the 1980s until today this pattern of urban exodus has continued. Jewish congregations in Boston have moved out with their practitioners to other areas, or have consolidated and scaled down from many congregations to just one. This has led to a diminished number of congregations within Boston itself. Boston’s Jewry still exists, but much of its historic population has left for the surrounding areas.

This project was created using the CERES: Exhibit Toolkit with help from the Digital Scholarship Group at the Northeastern University Library.